The History of Springdale 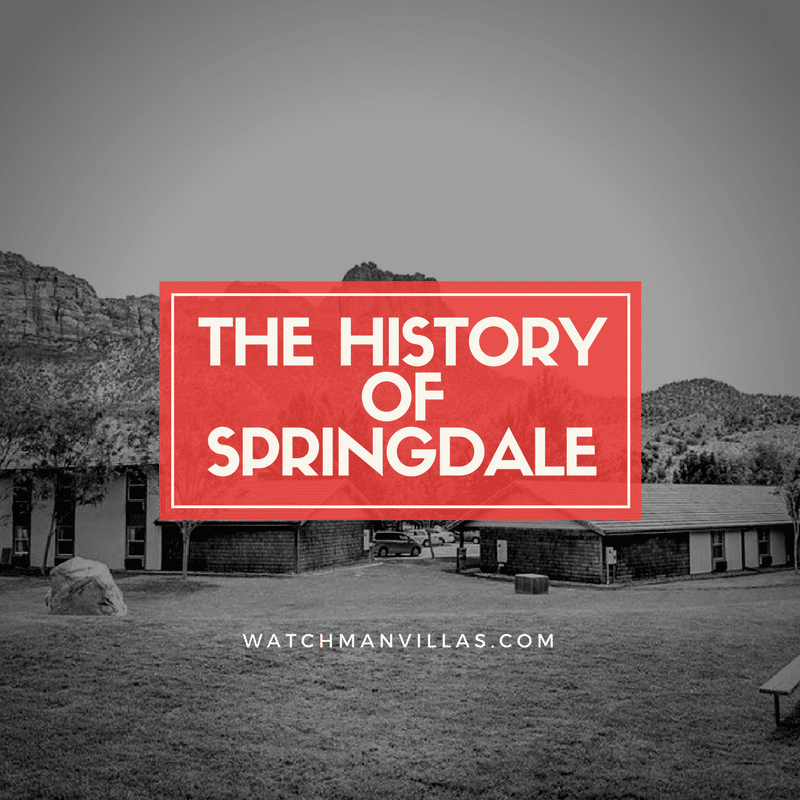 The indigenous people who inhabited the area known today as Springdale date back as early as 500 A.D. This is where Springdale history begins. Archeological research then shows that around 1200 A.D., the Anasazis left the Zion area. When early European settlers began to show up, tribes of Paiute people were found living there near the Virgin River. In 1776, these European settlers crossed the Virgin River through modern-day LaVerkin, UT and were part of what was called the Dominguez-Escalante party. Though they didn’t settle here, they are considered the first outsiders to venture through the Zion Canyon area.

Finally, in 1862, the first settlement was established and would eventually be given the name Springdale (by a man named Albert Petty, some records say). Mormon pioneers traveled to Southern Utah to build a cotton mission when they discovered the majesty of Zion Canyon. As was the case with virtually all pioneers traveling West during this period in history, life was hard. Homes were made of primitive materials and essentially every necessity was either grown or homemade. Livelihoods were constantly in a state of peril due to Mother Nature, disease, hostile intruders, and other external forces. To the early residents of Springdale, education was of near-equal importance to putting food on their tables. Because of this, schools were some of the first structures constructed.

Springdale history continues with a transportation milestone. In 1912, roads from the outside world finally made it Springdale and automobiles made their first appearance in the area. When this connection to the rest of the world was made, it shouldn’t be any wonder that Springdale’s tourism industry was quickly born. Even during this early period in Southern Utah’s history, people traveled to specifically view Zion Canyon from as far away as Salt Lake City. It didn’t take much time for the word about Zion to reach out even further and for the area to receive national recognition. In 1920, Zion was given its original name, Mukuntuweap National Monument which would, a few years later, be changed to Zion National Park. Springdale grew at an alarming rate from this moment onward as far as amenities and conveniences were concerned. Electricity was soon established followed by stores, tourists camps, gas stations, lodges, telephones, paved roads, etc. Springdale also became a place for young people to explore careers in tourism and resource management, allowing the town to venture outside agriculture as the primary occupation that was available. Even then, Springdale was still quite isolated due to very limited access. At the turn of the century, there still wasn’t highway access. Then, in 1930, Zion-Mt. Carmel Highway finished construction, along with its famous mile-long tunnel carved through the sandstone mountainside. This officially opened the door to the world and allowed ease of access into the Park.

After some years, the need for government became apparent. Springdale became a municipality in 1959 which gave birth to a new era of commercialism and contemporary architecture which, over time, replaced the Mormon pioneer dwellings and structures. And that brings us to modern-day Springdale which has become one of the most respected and beloved destination locations in the United States. Miraculously, Springdale has been able to maintain it’s small-town charm even with millions of Zion visitors annually. It’s really an incredible feat that has given the town a very special ambiance; one that is not easily forgotten. With luxury resorts, restaurants, and a variety of top-notch local businesses added into the mix, the community of Springdale continues to hold its own as a vacation hotspot all by itself, even with Zion National Park in its backyard. Visit WatchmanVillas.com to book your next stay in Springdale and for more articles and information on the best city in the world!

The History of Springdale