Peaceful Coexisting: How to Stay Safe Near Zion’s Wildlife 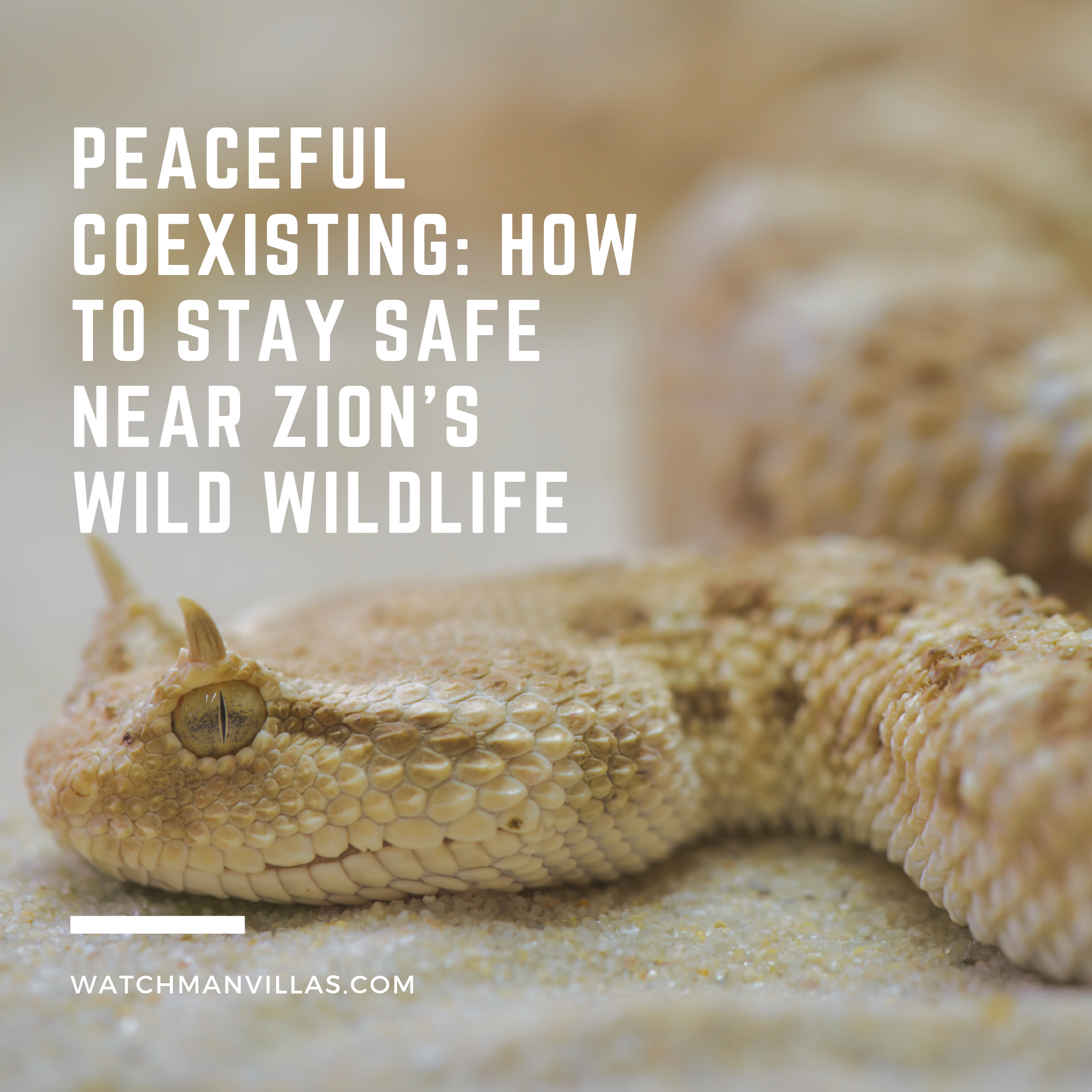 Zion National Park is home to 68 species of mammals, and just as many snakes, lizards, and other critters. Many of these are harmless. While a rock squirrel might steal your lunch if you leave it unattended and kangaroo rats will raid your campsite if you leave garbage out and about, these creatures are far from dangerous. As long as you don’t try to pet them, you’re unlikely to get bit.

The same can’t be said for some of Zion’s other native wildlife. From mountain lions to rattlesnakes, the park and the surrounding region are home to a variety of–well, wild wildlife. A bite, scratch, or other attack from one of these animals or reptiles can leave you needing medical attention, and fast. If you do get bit, even the smallest, most adorable critters can carry dangerous diseases. Luckily, there are a few things you can do to ensure a peaceful coexistence with most of the creatures you may encounter on the trails. Keep reading to learn more. 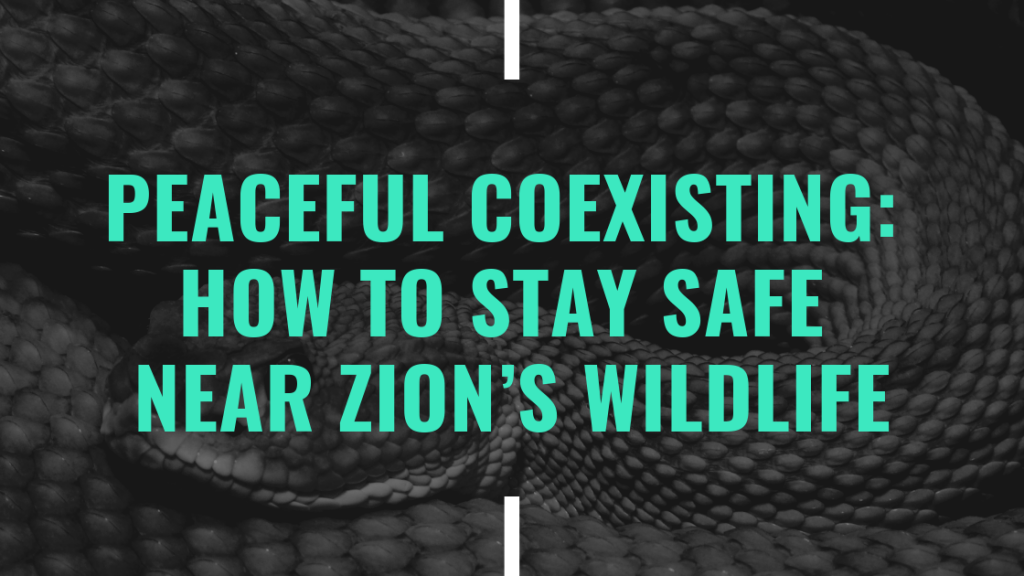 The best way to avoid a dangerous encounter with wildlife is to always maintain a safe distance. For less-dangerous wildlife, like deer, you should always stay at least 100 feet, or 30 meters away. For more dangerous animals like mountain lions or bears, as much distance as you can keep is a good general rule.

Keeping a safe distance from wildlife isn’t just for your safety. Getting too close to these animals can cause them to become accustomed to human interactions. This reduces their natural fear, leading them to stay closer and closer to humans, cars, and civilization. This means more auto accidents involving wildlife, the spread of disease, and other issues.

Zion National Park isn’t a zoo. The animals you’ll see here are wild, even if some, like rock squirrels or deer, seem like they are friendly with people. Never, ever try to feed any of the wildlife you see in and around the park.

Not only can this lead to you getting bit, scratched, or otherwise attacked, but it also leads to that problem we mentioned earlier. If the wildlife becomes accustomed to being fed by humans, they’ll start approaching them more often. They may stop hunting or foraging for their own food, instead trying to eat human food. These lack the nutrients that these animals need to survive. Wildlife that becomes accustomed to human interaction may need to be euthanized if they become a threat to visitor safety. 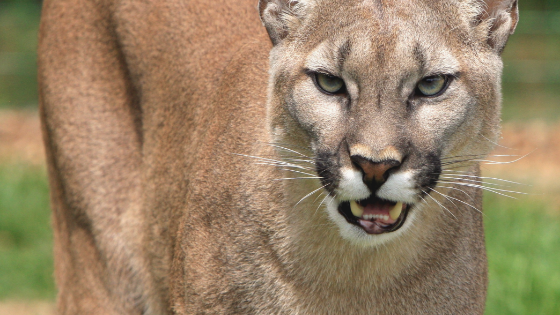 If you’re going to be camping while in Zion National Park, you’ll have the opportunity to get even closer to the local wildlife than most day visitors to the park. That’s because many animals come at only at night, or emerge in the early morning and late evening hours when most people have left for the day.

But while these spottings can be fun, catching a critter rooting through your backpack or tent in the middle of the night is not. Storing your food properly will help keep the critters out and ensure that you still have breakfast when you wake up in the morning. Unlike camping in other, wooded national parks elsewhere in the country, there aren’t many trees where you can tie up your food high above the ground. Instead, you’ll want to bring containers that are specifically designed to be animal proof.

Don’t forget that you’ll need to pack out all garbage, from food waste like apple cores to used toilet paper, when you’re backpacking. Plan ahead to store these items in sealed containers while still on the trail, as these can attract wildlife as well.

Many visitors to the park assume that traveling in a large group will scare away wildlife. But that isn’t always the case. In fact, large, loud groups can end up spooking creatures you encounter on the trial. This can cause them to panic, which can lead to someone in your group getting hurt. Unlike when you’re traveling alone or with a single companion, animals may feel cornered as a large group approaches. Remember to keep your distance, and remind anyone in your group who may forget how dangerous it can be to approach wildlife.

Back Up if They Approach

Another common mistake among inexperienced park visitors is that they think if an animal approaches them, they are in the clear. But while that squirrel, deer, sheep, or other critter may look friendly as it comes in close for a picture or a pet, that may be a sign that something is wrong. Diseased animals may become confused, and approach humans. Other times, it could be a sign that an animal has become too accustomed to people. In either case, it’s up to you to back away slowly until you are a safe distance from the animal.

Zion wildlife is as vibrant and diverse as the landscapes they live in. And with a few simple tips and rules, you can view, photograph, and enjoy them safely! 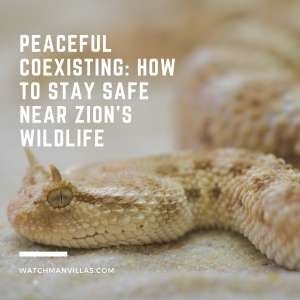