Driving, riding or hiking through Zion National Park, or most areas of Springdale, Utah, for that matter, it’s impossible to miss the towering rock formations that jut out of the canyon in a variety of shapes, colors, and sizes.

To the untrained eye, these peaks are tough to distinguish. At first glance, each one looks similar to the next.

But each of those massive rock formations is not only unique, but also named and recognized as one of the icons that make the park so special. Keep reading to learn how to spot some of the park’s most popular landmarks. 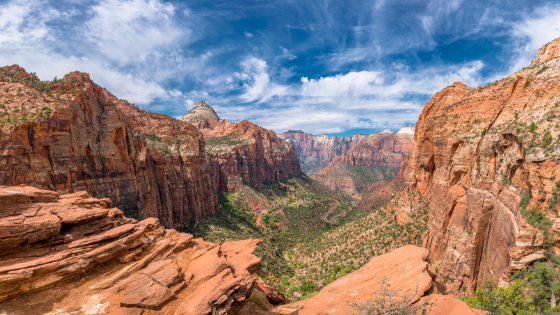 Court of the Patriarchs

Perhaps the easiest-to-spot peak, or rather three peaks, in the park is called the Court of the Patriarchs. Spaces close together, these three peaks are located on the western side of the canyon. Like many landmarks in the park, this one gets its name from the bible. The three peaks each has its own name as well. From left to right if you’re looking north into the canyon, they are called Abraham Peak, Isaac Peak, and Jacob Peak. Jacob Peak is easy to spot for its white top.

If you want to get a great shot of these iconic peaks, or if you just want a little help identifying them, head to the Zion Canyon Shuttle’s fourth stop. A short trail takes you to a viewpoint that rises above the tree line to give you a great view of this trio formation.

Tower of the Virgin

Another iconic set of peaks is the Tower of the Virgins. Rather than individual rock formations, the Tower is a large mountain with a series of jagged peaks near the top. Also located on the western side of the park, several of these peaks have their own names. The Altar of Sacrifice is recognizable for the red streak down its face, caused by iron oxide in the rock. The northernmost peak is called the Sentinel.

If you’re looking north from the Zion Lodge, this formation fills your frame of view. This sandstone cliff is jagged both at the peak and on the cliff face.

Still at the Zion Lodge? Don’t leave just yet. Instead, turn around. With your back to the Lodge, look across the road and up. There, you’ll spot the popular Lady Mountain. Many believe that the shape of this rock formation mimics the shape of a woman, hence the name.

To spot this landmark, you’ll need to drive through the Zion-Mt. Carmel Tunnel. If you’ve come in the park’s main entrance, drive a ways past the tunnel, until you reach a large pull-off on your left. Park your car there, and then turn around to face the way you just came.

If it isn’t winter and the cliff face isn’t covered in snow, you’ll notice the distinctive checkerboard pattern scored in the rock right away. This wasn’t formed by some giant dragging lines across the rock. Instead, centuries of wind and water have carved the near-perfect grid into this straight peak.

Zion’s jagged peaks and steep cliff faces mean that many of the rock formations on this list are wonderful to look at and impossible to reach. But not this one.

Popular Angels Landing rises more than 5,000 feet above the valley of Zion Canyon. And you can hike to the peak, just as long as you have the right gear, hiking experience, and a healthy dose of courage. This hike isn’t for the faint of heart, or those who are new to hiking rough, rugged, uneven trails. It’s treacherous, but if you can make it to the top, you’ll be rewarded with what many feel is the best view in the park.

Not up for the hike? You can still admire this point from anywhere in the park, Springdale, and other areas around Zion.

Some of the famous rock formations you’ll be looking for will be tough to spot, even when you know what they look like. This one, though, stands out, thanks to its color and shape.

Rising to the north of the Zion Lodge, on the eastern side of Zion Canyon, is a towering white formation with a flat top. Aptly named the Great White Throne, this is a great formation for new visitors to spot.

Whether you’re driving through the park on a winter day or enjoying a ride in the canyon on the Zion Canyon Shuttle, spotting the park’s famous rock formations is a great way to get your bearings and score a few awesome photo opps. Having trouble spotting one or more of the formations on this list? A ranger will be more than happy to help! 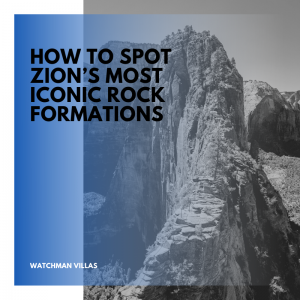