The History of Springdale, UT 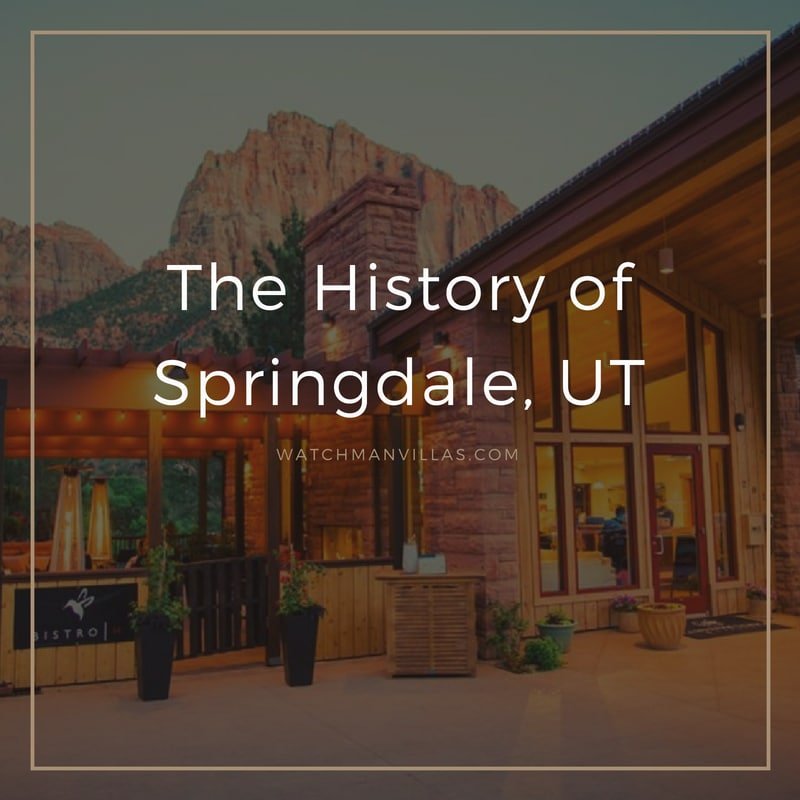 By looking at today’s Springdale, you wouldn’t know the struggles of its early beginnings. Though not your typical, thriving metropolis, it has evolved in just 150 years to be a welcoming beacon to tourists from all parts of the world. Springdale possesses excellent restaurants, beautiful hotels, and delightful gift shops. The history of Springdale includes a rich heritage of Native American Indians, explorers, Mormon Pioneers, and settlers, seeking their homesteads for family and security.

It was around 500 A.D. when basket-making people inhabited the Springdale and Zion National Park region. Later the Anasazi Indians populated the Southwest, including Southern Utah. The Anasazis existed there about 1000 years to about 1200 A.D., leaving writings on rocks and remnants of housing and tools. At about the time of the Anasazis’ vacating Southern Utah, the Paiute Indians entered the region in bands of a small tribe. Bands of Paiutes were usually a few hundred people. The Paiutes survived by foraging for berries, nuts, seeds, and roots; they also hunted deer, rabbits, and other animals. Where water was plentiful, the Paiutes raised crops, such as corn, squash, wheat, and other vegetables.

Fast forward to 1776. The history of  Springdale would not be complete without some mention of European explorers, right? The Dominguez-Escalante party explored Southern Utah, crossing the Virgin River, which flows from Zion National Park through towns like Saint George. Later in 1862, the president of the Church of Jesus Christ of Latter-day Saints, Brigham Young, sent some Church members to Southern Utah to establish a cotton mission, which is why the region is known today as Utah’s Dixie. Some of the saints settled at the mouth of Zion Canyon, where the town of Springdale emerged. According to local residents,
Mrs. Albert Petty named the place “Springdale” because of the site her husband chose for their house; it had natural springs.

1885 and 1897 saw the first schoolhouse and post office, respectively. Children dedicated time to learning the three Rs, s well as working for family and community in the fields. The history of Springdale was now off and running, though life was very hard. Cold winters and hot summers made comforts rare and preparations a necessity, and children pitched in with farm work. Flash floods occurred regularly from storms overflowing the Virgin River, and commerce with other towns was limited by relative inaccessibility to Springdale. Roads needed to be built.

Finally, in 1912, Springdale was blessed with exposure from the “outside world.” Roads made possible visits from people in other towns, even as far as Salt Lake City. Commerce improved quickly, and the history of Springdale was forever changed. Zion National Park was dedicated by the federal government in 1920 and was originally called “Mukuntuweap National Monument.” Increased tourism prompted the installation of electricity, telephone, and gas stations. Modern conveniences and accessibility accelerated the history of Springdale to include more people and more comfortable lifestyles. Still a charming place, Springdale retains some of its historical artifacts from Indians and Mormons; however, because of the popularity of the country’s third most visited national park, Springdale has something for everybody, including fine dining, a buffet of gift shops, and rustic, yet classy hotels.

The History of Springdale, UT