Hard to Bear In Southern Utah? 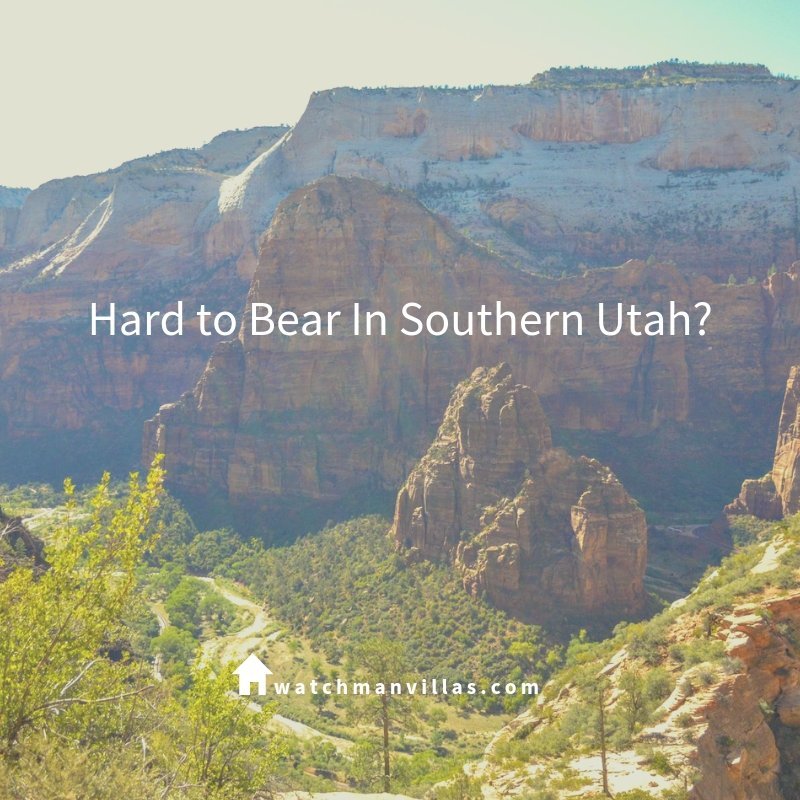 Myths and legends abound about bears in Southern Utah, and some are based on truth, but one thing’s for certain.  You don’t want to pick a fight with any bear. This article will debunk a few myths about seeing a bear in Southern Utah, tell some real tales, and explain the status of bears here.

Legends And Myths Of Seeing A Bear In Southern Utah

One story has a bear getting help for a stranded hiker.  Supposedly, an overzealous hiker was stuck on a ledge in Zion National Park with no way to get to safety.  A bear wandered on the valley, below, and was startled to see the man yelling for help. The bear ran down the hill near the campground and began scraping his paw in the dirt until a man followed the bear back to the site, discovered the man, and had him rescued by a helicopter.  Incredible? Yes, but definitely heart-warming. It sounds like a TV episode of Lassie.

Another myth reports that a Grizzly was seen killing a white, Black Bear near Bryce Canyon, but Utah Wildlife Resources is adamant that no Grizzlies have been in Utah since 1923.  Not only that, it is highly unlikely that the white bears have made their way to Utah from islands of western Canada and the northwestern U.S.

The legend of Old Ephraim is one of truth.  It’s recorded that he was the last Grizzly in Utah (northern Utah near Logan) and the curse of many sheepherders.  Frank Clark had tracked the bear for ten years before sending Old Ephraim, with a rifle, to meet his maker in 1923.  The sheep predator stood over ten feet tall and weighed 1100 pounds.

Status On Seeing A Bear In Southern Utah

Utah’s bear is the American Black Bear, and about 4,000 of them roam the mountains of Utah.  Largely herbivorous, Black Bears will eat leaves, fruits, nuts, and berries. They will also eat fish, insects, honey, and small animals.  They hibernate about five months in holes and caves which they have dug themselves, and sometimes they’ll choose an existing cave for the long winter’s nap.  During hibernation, their heart rate and breathing slows to preserve energy, which is provided by their fat. It is not uncommon for a hibernating bear to wake up, go outside, eat and drink, then return to the slumber pit for a few more weeks.

Utah’s Black Bears are not typically aggressive unless they see a threat to their food.  Sows with cubs are not known to be as aggressively protective when humans are in the vicinity as are Brown Bear mothers.  Utah’s Division of Wildlife Resources keeps tabs on Black Bear mothers by tranquilizing them and attaching an electronic monitor as a collar.  Later, the bears are easily located to learn if cubs have been born and if they survive.

Tips For Cohabitating With A Bear In Southern Utah

Be aware that in dry years, the food sources for bears are not as prolific, so bears will have to wander to places near humans.  Black Bears have been spotted in neighborhoods and farms, where they are potentially dangerous. Don’t leave food outside your house.  Division of Wildlife Resources and Animal Control Police are called to tranquilize the bears so they can be returned to a safer habitat.

Permits are issued each year for hunting Black Bear.  It’s a challenge to find them, so only the best hunters succeed.  The meat tastes similar to pork.

If you are enjoying the outdoors and come upon a bear, stand still and wait for the bear to walk away.  Do not run or climb a tree, as bears climb trees as well or better than you. Carry a spray can of a bear deterrent, just in case.  If a bear gets aggressive, spray it in the face. Fight if you have to. If you are armed, shoot to kill, not to warn.

Hard to Bear In Southern Utah?