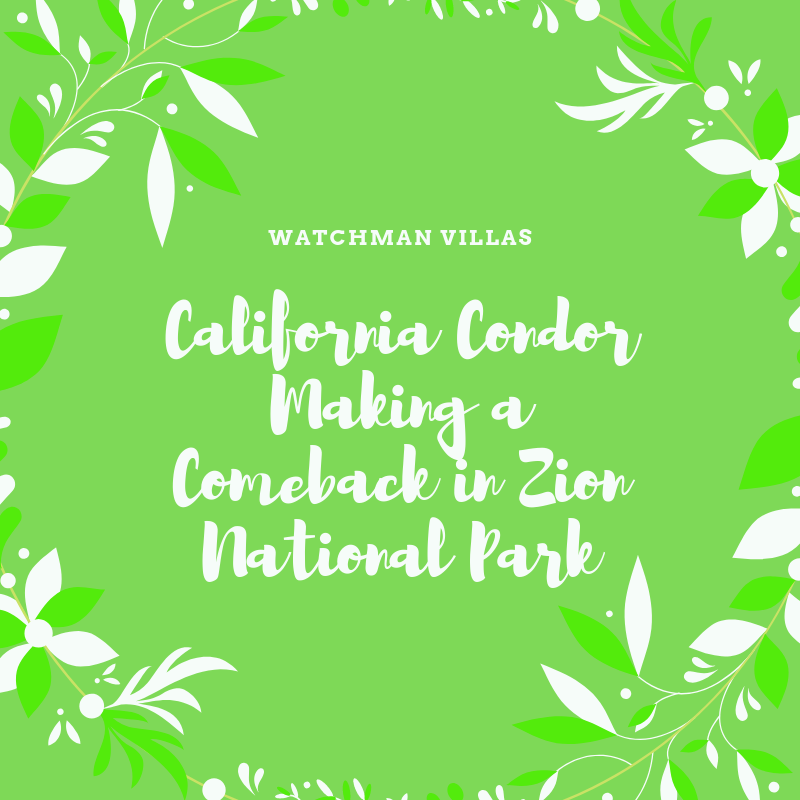 This past week, the very first California Condor to survive past infancy in the park since the species nearly went extinct has finally left the nest.

Visitors in the park were excited to see the flight, which experts describe as a “controlled fall.” The young chick is actually the third born in the park in recent years. However, the previous two hatchlings didn’t survive long enough to fly from their nests.

This new hatch is a landmark for the species that just three decades ago was considered extinct in the wild. From thousands of condors across the Southwest to just 22 in the wild, to today, when more than 500 condors call Arizona, California, Utah, and Nevada home. Keep reading to learn more about this amazing species’ journey.

The California Condor is the largest bird native to North America. They are recognizable for their massive, dark wings and a comparably small head. Larger than the Bald Eagle, the condor’s wingspan can reach 10 feet.

California Condors once lived in a region that stretched from California far to the East, into Texas, Florida, and even New York, South into Mexico, and North into British Columbia in Canada. Social birds, they gather near carrion, their primary food source. They build nests high up on cliff faces, in the desert or near the coast. Because they are so large, this high altitude makes it easier for them to take off and fly.

While the California Condor population didn’t hit critically low numbers until the 1970s, the species has been protected in the United States for over 100 years. However, early regulations only sought to prevent the hunting of these massive birds.

Starting when early settlers made their way West towards California, Condors were hunted, captured, and poisoned. Settlers took their eggs and reduced the population of deer, elk, antelope, and bison that the birds once preyed on. Over the course of a century, the condor’s range shrank until it was limited to parts of Southern California.

In the mid to late 1900s, the worst threat facing the condors wasn’t hunting, but instead, lead poisoning. Lead from bullets and buckshot used to hunt animals was then left behind in the carcasses that condors feast on.

Evidence also shows that the use of DDT, a pesticide, prevented the hatching of some eggs and that the rise of species of ravens threatened their nests and eggs. Later, collisions with wind turbines further threatened the condor’s numbers.

Officially Extinct in the Wild

As the California Condor’s numbers declined from thousands to hundreds to just 27 individuals in the late 1980s, the U.S. government stepped in with a conservation plan. The start of that plan was to capture the remaining 27 condors and place them in captivity. The surviving birds were split between the Los Angeles Zoo and the San Diego Wild Animal Park.

In captivity, their numbers slowly grew. Eventually, they began to be released back into the wild. Today, there are more than 500 condors living in the Southwest.

In April 2019, park rangers began to notice changes in the behaviors of a pair of breeding condors in a nest near Angels Landing. When the egg hatched, the chick became the 1,000th to hatch since the conservation program was launched.

Despite having two prior chicks hatch in the park, this recent hatch is the first to fly from the nest, marking a special occasion for a species that once numbered in the hundreds in Zion National Park.

Hoping to Catch Sight of the Chick?

If you have a visit planned to Zion in the coming days and are hoping to spot the chick as it continues to explore its new home, you may be in luck.

Hop on the shuttle and ride to Shuttle Stop 8, Big Bend. There, you’ll find rangers and volunteers stationed with spotting scopes to help you try to catch sight of the famous bird. They’ll also be happy to answer your questions about this amazing species.

Today, the California Condor’s biggest threats are still lead poisoning and destruction of their natural habitat. In 2013, the state of California outlawed the use of shot containing lead ammunition for hunting. Full implementation of that law went into action this past July. While it will take time, this move will help reduce the number of condor deaths as a result of lead poisoning in California. Unfortunately, other states, like Utah, have yet to make the same change.

If you want to do your part to protect the recent hatchling and all of the other California Condors that call Zion home, make sure you know how to safely and responsibly co-exist with the park’s wildlife. Keep a safe distance, pack out trash, and stay on the trails to avoid disturbing nests or feeding areas. While you can–and should–visit the park to try to catch a glimpse of this historic chick, do so from a distance. 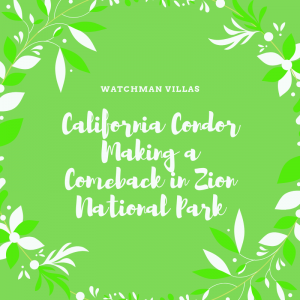