The Mighty 5: A Brief Overview 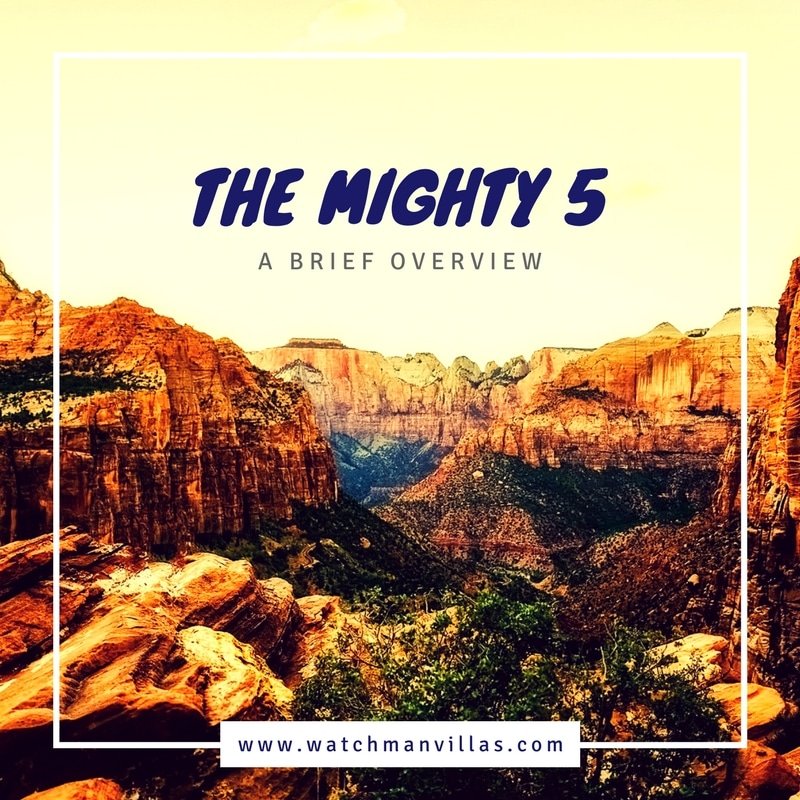 Most people who enjoy traveling even a little bit are familiar with The Mighty 5, the nickname given to Utah’s five national parks. For those who may not have visited some of these places, we want to give you a brief overview of each one. Though Zion is the most popular of the five, the other four are simply incredible in their own right and play an enormous role in the rise of Utah’s tourism star. Utah’s Mighty Five are as follows: Capitol Reef National Park, Canyonlands National Park, Arches National Park, Bryce National Park, and Zion National Park.

Of all the national parks in the state of Utah, this is the one that sees the least amount of annual visitors which truly is a shame because it is incredible. It is perhaps best known for the rugged white domes and cliffs as well as the many ridges, buttes, monoliths, and canyons that exude many different colors and are quite a sight to see. One popular location inside the park is the Burr Trail Scenic Backway which is a wonderful campground. Like most other national parks in Utah, Capitol Reef includes possible activities such as guided tours, hiking, horseback riding, and more. Among the storied history of this park, there still exists orchards planted by early pioneers.

This amazing place is near the city of Moab in the southeastern part of Utah. Canyonlands has many proponents who insist that it is their favorite national park in the state, in large part due to its seemingly endless amount of mesas, buttes, and canyons showcasing (as usual) a wide range of colors. The Colorado River and the Green River make appearances in Canyonlands as well. One unique aspect of this particular park is that it has been divided into four parts, each of which has been given its own name: the Rivers, the Island in the Sky, the Maze, and the Needles. Of all Utah’s national parks, Canyonlands is certainly the most diverse when it comes to types of landscapes. Kayaking is popular here, as is rafting, off-roading, backpacking, mountain biking, and of course, hiking.

People around the country are likely most familiar with a particular landmark that is found in Arches National Park because the famous Delicate Arch is featured on many Utah license plates. These natural arches are found in abundance here and are just amazing to see. There are over 2,000 of them in the park, formed millions of years ago through interactions between receding oceans and deposited salt beds. The park also features lots of magical looking balanced rocks, gravity-defying fins, and huge spires. The scenery here is breathtaking. And again, as is characteristic of Utah landscapes, the many contrasting textures and colors create an otherworldly experience for visitors.

The phenomenal Bryce National Park lies in the southwestern part of the state. This amazing place is littered with what has been dubbed amphitheaters – all natural, of course – that are populated with vertical rock formations that are difficult to describe. You just have to see it to believe it. And believe it or not, despite the parks name, there are no canyons here. Oh well. The various rock formations and the myriad of colors are a wonder to behold. In the winter, this is one of the most beautiful sights you’ll ever see. Bryce National Park is also known for its lush plant diversity.

And then, less 50 miles from Bryce National Park, there is Springdale’s own Zion National Park. Certainly one of the most well-known and highly-regarded of all the national parks in the country, the beauty of Zion is difficult to match. Towering cliffs of sandstone and multi-colored formations with forests and rivers interspersed throughout, the sheer number of available activities is near overwhelming. Mother Nature seems to have set up shop here at the bottom of Utah. Visitors have the option of engaging any of the dozens of hikes on the canyon floor or venturing upward and summiting some of the most amazing hikes and peaks in the world, taking you to unforgettable views. Tall plateaus, mesas, canyons of sandstone, and various desert landscapes are what this park is known for.

The Mighty 5: A Brief Overview