Bryce Canyon and Zion in the Off-Season 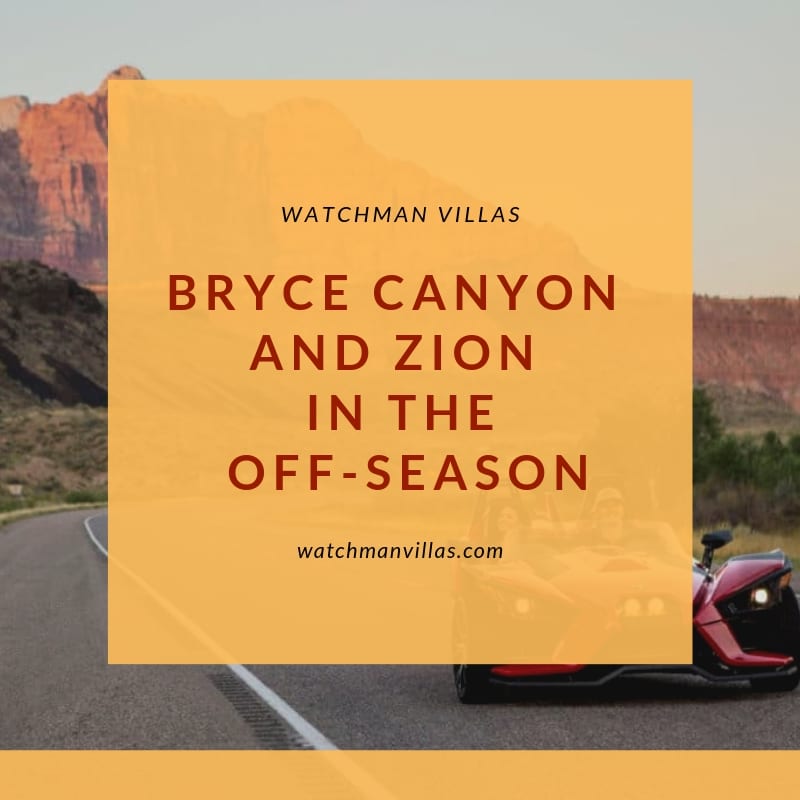 Because of the popularity of Utah’s national parks, especially Zion and Bryce, tourists consider the alternative to visiting them during the busy season of summer months, when the huge crowds are there.  Families have historically used the summer break from school to take the kids on vacations, so the masses at Zion in June can cramp your style a bit. Planning a trip to Zion in the off-season can be a great strategy for enjoying more of this breathtaking park for less hassle and less money.  This article presents the differences between visiting Zion and Bryce National Parks in summer vs. the cooler months of the off-season.

The hotels in Springdale, Utah fill up fast during the busy season of summer; however, vacancies are plentiful in Springdale in Zion’s off-season.  Prices drop to reflect that. Same goes for the hotels which surround Bryce Canyon. Springdale is the charming town at the entrance to Zion, so it is convenient and features excellent hotels, restaurants, and gift shops.  Classy vacation rentals, such as the Watchman Villas, are less expensive in winter months. They are well-equipped condos that indulge you and your family with comfort, style, and independence. Food in Springdale can be a little more expensive because restaurants know you have to eat.  Convenience cost, like in airports, affects Springdale, too.

Climate Differences Between Zion and Bryce

The overall differences in elevations between Zion and Bryce National Parks make their climates considerably different.  Zion ranges from 3,700 feet at its lowest point to 8,726 feet above sea level at the highest land point. Bryce’s elevation begins at 6,620 feet and rises to 9,115 at the highest points.  Therefore, Zion’s climate is milder in winter and hotter in summer than is Bryce’s.  This allows easier hiking on the trails of Zion in the off-season, but risk of dehydration in summer months when temperatures hover around 100 degrees Fahrenheit because of the scorching sun.  At Bryce in winter, smart hikers need better gear for ice and snow than in Zion. The caveat is that Zion’s trails also can become treacherous with ice and snow at its higher elevations in winter.

Bryce’s temperatures during the Summer months are normally about 10 degrees cooler than Zion’s.  So, a typical summer day of 95 degrees at Zion would be about 85 in Bryce. Spring and fall weathers bring more comfortable readings for outdoor activities when daytime highs at Zion are in the 70s and 80s, and overnight lows are in the 40s.  At Zion in the off-season, daytime temperatures range between 50 and 60; while overnight freezing is quite common.  Bryce sees a lot of 40s and 50s in afternoons of fall and spring, while nights can be at freezing temperatures.  Weather at Zion in the off-season is unpredictable, sometimes snowing and freezing, sometimes dry and jacket weather.

At Zion, you’ll want to avoid long hikes in midsummer, when the sun is baking the park, often causing dehydration; and at Bryce Canyon, winter storms can make hiking on steep trails dangerous with ice and snow.  Check weather forecasts before heading through the “Narrows” hike along the Virgin River of Zion. A sudden rainstorm can turn a sleepy stream into a raging torrent, which can carry you to drowning.

Fewer visitors in winter mean no shuttle from Springdale’s hotels to Zion in the off-season.  Drive your car right up to trailheads, and see things with more independence.  And in case someone sprains an ankle, your car is nearby to quickly transport the injured to the comfort and ice of your hotel.

With smaller crowds, you will have better access to park rangers.  They are a great resource of information about the park, so pick their brains.

Both Zion and Bryce are rich in colors; though vegetation is markedly less colorful in winter.  With fewer visitors in Zion and Bryce during the off-season, wildlife becomes more ubiquitous. You have a better chance of seeing turkeys, deer, elk, and other animals in the colder months.  Many gorgeous photos have been snared of wildlife against a background of reddish sandstone, blue sky, and, sometimes, even a snowcapped hill. A scene of orange Hoodoos (naturally-sculpted statues) topped with white snow at Bryce Canyon is unforgettable for many.

Bryce Canyon and Zion in the Off-Season