20 Things You May Not Know About Zion National Park

Planning a visit to the park? Looking to brush up on your trivia? We can help with that.

In honor of the start of 2020, we’re bringing you 20 facts you might not know about Zion National Park. Keep reading to learn more.

When you think about the best-known national parks in the nation, which ones do you think of? If you’re like most, names like Yellowstone, Yosemite, Acadia, and Glacier might come to mind. But what many visitors don’t realize is that when it comes to visitor numbers, Zion beats out every one of these.

With more than 4 million people making their way to the park each year, Zion National Park is the 4th most-visited national park in the country.

2. Zion is Over a Hundred Years Old (But Barely)

If you visited the park this past year, you probably already know this fact. That’s because Zion celebrated 100 years since becoming a national park in 2019. While it was previously a national monument, Zion became a national park on November 19, 1919, which means that it’s now more than a century old.

The name we know today was given to the park in 1919. But when President Taft first designated the area in 1909, it was named Mukuntuweap National Monument.

The first Zion Lodge was built in 1925. It was constructed by a subsidiary of the Union Pacific Railroad and designed to promote rail travel to the park.

But the current lodge was actually built in 1967, about 100 days after a fire destroyed the original lodge. While it was rebuilt quickly and didn’t look much like the original, the rustic look was restored during a remodel in the 1990s.

5. There’s a Second, Lesser-known Section of the Park

Most visitors to Zion drive or ride along the Zion Canyon Scenic Drive. They stop at popular overlooks like the Temple of Sinawava. Some hike the Riverside Walk or Weeping Rock, or more challenging trails like Angels Landing or The Narrows.

But far fewer guests make their way to the second section of Zion. Called Kolob Canyon, you can’t get to it from within Zion Canyon. Instead, you’ll need to travel 40 miles north on Interstate 15. Equally stunning as the rest of the park, Kolob Canyon features hiking trails devoid of crowds, and plenty of overlooks.

6. It’s Home to One of the Most Dangerous Hiking Trails in the World

Traversing narrow cliff faces with drops of over 1,000 feet on either side is certain to get your blood pumping. Turns out, most people agree. That’s why Angels Landing often makes the list of the most dangerous hiking trails in the world. The park has added chain handrails to help make the hike safer, but the danger remains.

Built in 1930, the iconic Zion-Mt. Carmel Highway, which passes through the Zion-Mt. Carmel Tunnel and connects Zion Canyon to Bryce Canyon, is approaching its 90th birthday.

It isn’t just the highway that’s celebrating 9 decades this year. Started in 1927, the Zion-Mt. Carmel Tunnel was completed in 1930, allowing the highway of the same name to open.

The fact that this incredible tunnel was built in the 1930s is impressive. But the fact that its also over a mile long is even more so.

Unfortunately, its age, length, and lack of light can make it tricky to traverse. For that reason park officials regulate traffic, often closing the tunnel to traffic in one direction to allow oversized vehicles to cross through.

10. The Park is Home to the Second Largest Freestanding Arch in the World

To get to this natural attraction, you’ll need to head to the Kolob Canyon section of the park. There you’ll find Kolob Arch. At 287 feet in length, it’s the second-largest freestanding arch in the world. It’s second only to Landscape Arch in Arches National Park, which spans 290 feet.

11. There are More than 100 Miles of Trails in Zion National Park

If you had plenty of time–and water–you could hike more than 100 miles in Zion without repeating a single trail!

For those needing an accessible or easier alternative, there are 15-miles of paved trails in the park. Riverside Walk, Pa’rus Trail, and Weeping Rock are a few of the most popular.

13. Some of the Park’s Landmark Names Reference the Bible

Three of Zion’s most iconic peaks are named for biblical references. The Court of the Patriarchs, a grouping of sandstone cliffs, is named for three Old Testament figures; Abraham, Isaac, and Jacob.

14. You Can’t Always Drive Your Vehicle Through Zion Canyon

During the busy season in the park, which runs from March to November, traffic on the Zion Canyon Scenic Drive is restricted to the park’s shuttles. This is done in an effort to reduce parking woes and limit traffic.

15. If You Want to Take a Drive, Visit During Winter

While the shuttle restricts traffic in the park for much of the year, during the winter, you can drive your car on the Zion Canyon Scenic Drive. If you’re looking to do so, the first 3 weeks of December, or from January to the end of February, with the exception of President’s Day Weekend, are the only times you can do so.

While most visitors to Zion opt to hike or ride the shuttle from one overlook to the next, those are far from the only activities you can enjoy in the park.

Rock climbing is incredibly popular in Zion. Climbers from around the world come to conquer the 2,000 foot or higher sandstone cliffs the park is known for.

17. Wind and Weathering Has Carved a Gameboard on a Cliff Face

Because access to the park by vehicle is limited to a short stretch of road, many visitors don’t quite realize how large Zion really is. In reality, the park covers 148,733 acres in total.

19. California Condor are Making a Comeback in the Park

Earlier in 2019, the 1,000 California Condor chick born after an incredible conservation effort was launched hatched in Zion, in a nest below Angels Landing. This fall, the chick took flight, to the delight of park visitors and rangers. If you want a chance to spot the chick, you still have some time before he or she leaves the nest and takes on their own.

While the national park may be just 100 years old, the sandstone cliffs and rock monoliths that make up this iconic landscape have been shifting and forming for millions of years. And they continue to change, even today.

The Virgin River, which first carved the canyon, is always chipping and weathering away the rock, changing the park’s landscape. Sometimes after a flood, you can see the changes with your own eyes, as boulders are broken and cliff faces altered. 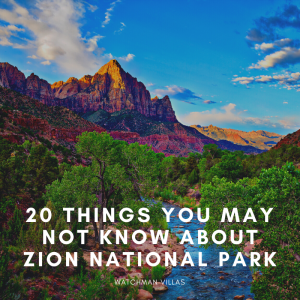