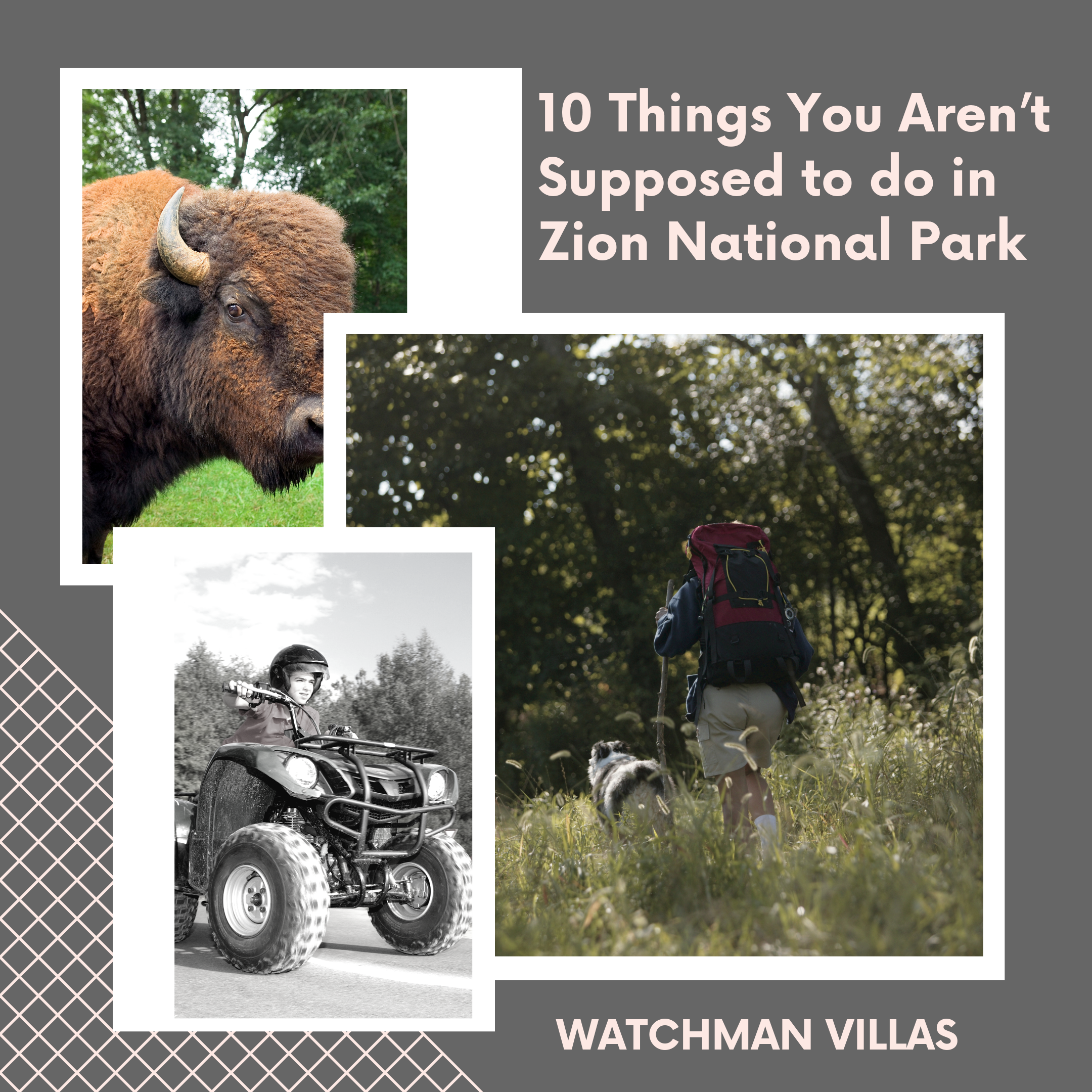 With millions of visitors entering the park every year, Zion would become chaotic and overrun if it weren’t for the rules and laws that keep most visitors in line. The system isn’t perfect, but it does stop some of the destruction to the park’s natural resources, protects visitors, and otherwise helps to maintain order.

Following the rules in Zion National Park isn’t hard to do; just so long as you know what those rules are. Keep reading to learn 10 things you may not know you aren’t supposed to do in Zion. 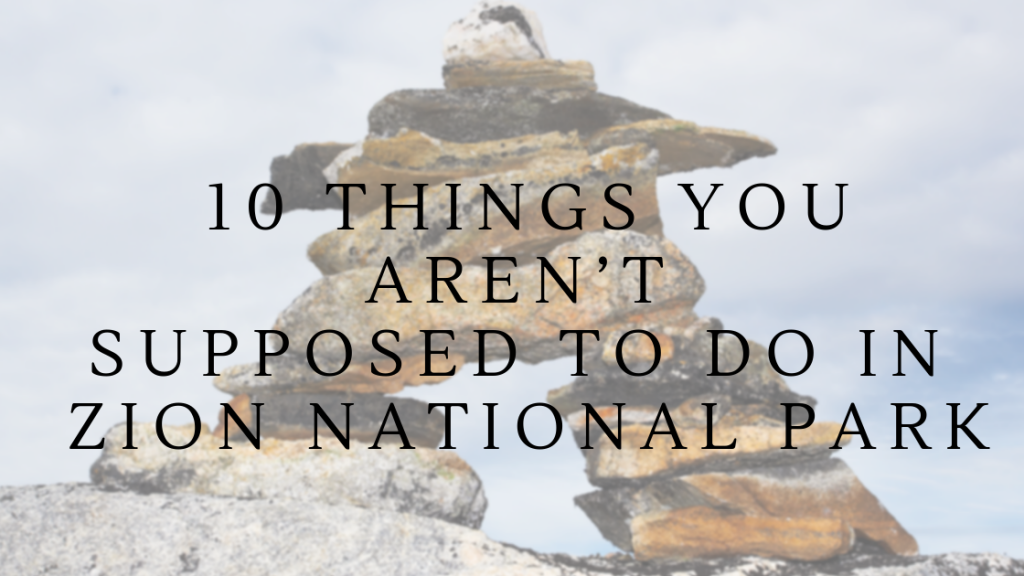 Towers of perfectly balanced rocks, also called cairns, are popular on the web. These tranquil statues pop up all over social media, usually in front of an ocean scene or other beautiful landscape.

These rock towers are actually permitted in Zion and other national parks. But not for the average tourist to build. Instead, rock cairns have been used for decades as directional guides. They point the way for hikers in backcountry across the nation. So when tourists start stacking their own creations, hikers may get confused.

Not only are you confusing hikers, but you could also be harming the environment by exposing soil to erosion and removing shelter for small animals.

This is one rule that often gets ignored, though visitors may not do so knowingly. That’s because Zion National Park actually prohibits groups of larger than twelve on all wilderness trails. This is to help prevent congestion and make sure that everyone gets to enjoy their hike. If you’re headed to Mystery, Spry, Behunin, or Echo Canyon, the limit is just six people per group maximum.

You already know that garbage and graffiti are illegal in the parks. But did you know that ‘leave no trace’ means staying on trails as well?

Straying from hiking trails can cause irreversible damage to the landscape. Once you make your own path, others will follow. This destroys plantlife which harms animal habitats. You could also be putting yourself in extra danger, as you won’t know what hazards are out there.

Recent bison attacks in Yellowstone National Park called attention to the danger of approaching or not respecting wildlife in our national parks. Zion is no exception.

You should never, ever approach, feed, harass, or otherwise disturb wildlife. You or the animal could end up hurt or you may cause that animal to develop a dependence that could harm their chance at survival.

If you have visions of camping in the backcountry, you’ll need to do more than simply hike until you’re tired and pitch a tent. Zion has three designated campsites in the park, including Watchman, South, and Lava Point Campgrounds. You’ll need to get a reservation to stay at any of these sites.

You can actually camp in the backcountry. However, you’ll need to obtain a permit to stay in the Zion Wilderness. Camping or sleeping in your car in pullouts and parking lots is never permitted, even if you have an RV.

This isn’t a rule across the entire park, but instead in certain parts. You are permitted to ride bikes on any park roadways. But if mountain biking is your thing, you’ll need to head to a nearby state park for that. The only trail in Zion that allows bikes is Pa’rus Trail.

The Zion-Mt. Carmel Tunnel is also off-limits to bikes, and for good reason. The tunnel is dark and narrow, and fatal accidents between cars and bikes have occured. The park service actually recommends hitchhiking to get through the tunnel if you’re riding through the park on a bike. 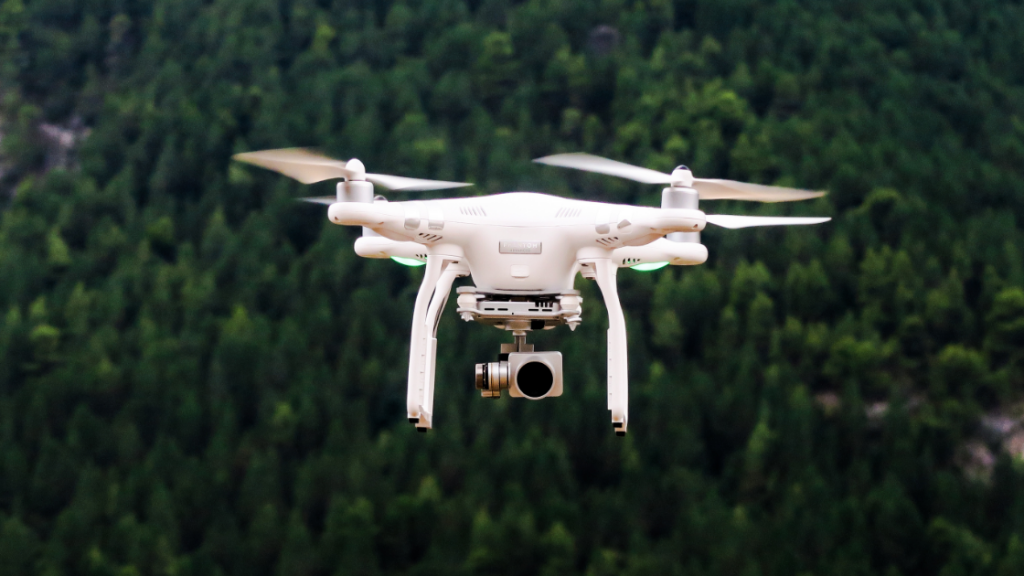 Like many of the rules and suggested guidelines on this list, this one isn’t specific to Zion alone. You aren’t allowed to fly drones in any national parks in this country. Unmanned aircraft of any kind, including model airplanes, quadcopters, and drones of all sizes and shapes are illegal to use within the boundaries of the parks.

This law came about after numerous incidents occurred. In Yellowstone, drones crashed into geysers. They soared over the Mall in Washington D.C., which is a huge safety concern. In one incident, a drone was even reportedly used to harass wildlife.

In some cases, individuals can obtain special permission to fly. But that will take some work and planning, and it’s rare to actually obtain a permit. Choose to ignore this rule and you’ll face a misdemeanor charge. The charge carries a penalty of up to six months in jail and $5,000 in fines.

ATVs and other off-road vehicles are extremely popular in southern Utah. Just don’t bring them in the park. Even if your vehicle is considered street legal, it won’t be allowed on the roads. Luckily, several state parks in the region do allow off-roading.

9. Bring Your Pets Along

Like most national parks, pets are prohibited on hiking trails, in buildings, and in many other areas. This isn’t because the park service hates animals; in fact, the opposite is true. This restriction is in place to protect the natural plant and animal life that call the parks home, and that could be threatened by your pup.

However, Zion is unique in that it does have a pet-friendly trail. If you want to bring Fido along on your visit, head to the Pa’rus Trail.

Service dogs are an exception to this rule. Registered service animals are allowed throughout the park.

Parking is a big problem in Zion. That’s one of several reasons the free shuttle was introduced and parking is provided at the visitor center and in Springdale.

If you do choose to enter the park in your own vehicle and you can’t find parking, you’ll either need to head to one of the designated lots outside the park or just keep searching for an open space. Parking on the side of the road or in any undesignated spots is not allowed anywhere in the park. 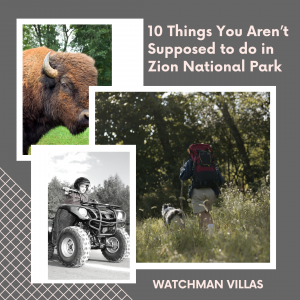